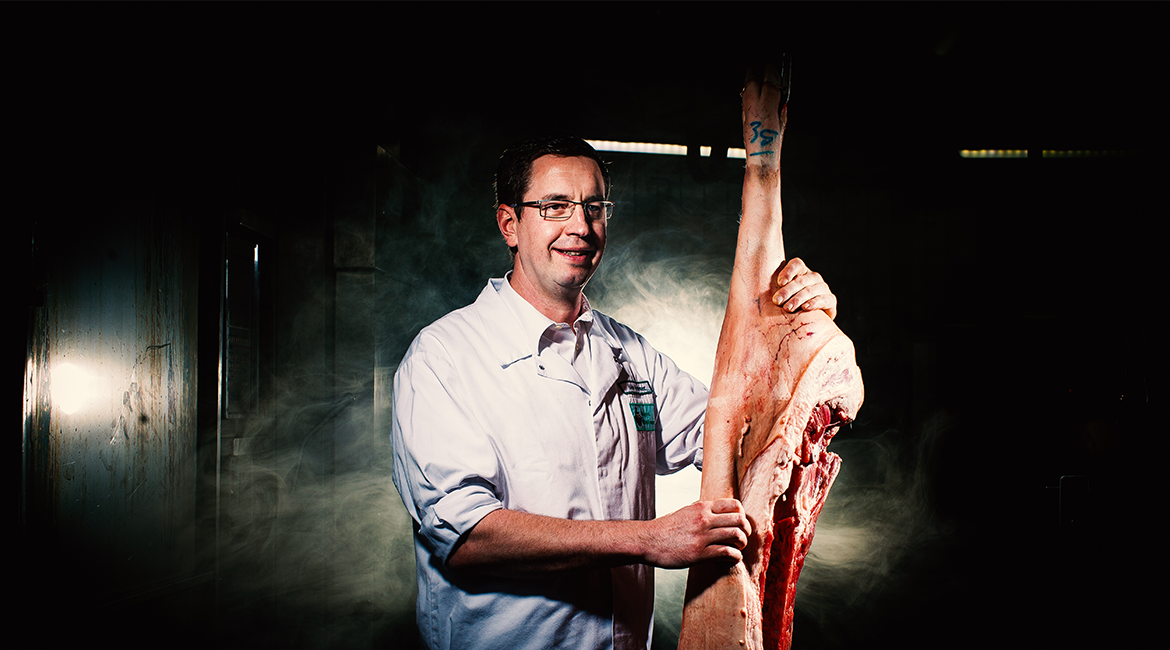 Everything that has to be mixed is put into my Rühle tumbler. (Udo Kramer)

Nothing left to chance

Monday isn’t the only day when Udo Kramer gets up early, but on the first day of the week the robust master butcher from the Black Forest rises extra early. “Monday is slaughter day”, says Udo Kramer. 35 pigs are supplied to his company, and two hours later everything is prepared for the fresh, roughly cut bratwurst sausages, as well as the meat (still warm from the slaughter) for the cooked sausage. The shop opens at 8am, and the warm, freshly made sausages are on the counter.

The butcher shop, founded by his father, is part of the furniture in Hüfingen. It represents pure Black Forest tradition. People in the neighbourhood know and cherish their butcher, Kramer. There used to be four butcher shops in Hüfingen, a town with 7,500 inhabitants. “We are the only one to stay in business”, says Kramer. The tall man smiles happily, as if to say that real quality and good taste speak for themselves.

Udo Kramer is one of five siblings. “They have all worked in the business”, he says. Being a family business is especially important if, as a small butcher shop, you want to stand out from the chilled counters in the supermarkets. The region therefore also provides a source of fresh power. 30 farmers from a radius of ten kilometres supply Kramer with animals for slaughter. No animal travels more than ten kilometres.

Udo Kramer has set high standards for himself – and his technology. His Rühle originals often run all night long. He chose them because he was convinced by their performance and reliability. “High tech by Rühle is effective”, he says happily. Kramer has tried a lot of things, but when he is convinced about something he stays with it. He will never part with his Rühle machinery.

However, that doesn’t mean he wouldn’t be open to new things. A friend of his, a local baker, gave him the idea of using a special type of water for his meat and sausage products. “We have the same well as everybody else here”, says Udo Kramer. But thanks to his Elisa system, vitalised water comes out of his taps. Kramer swears by this form of natural water treatment, in which the water flows through a type of subterranean mountain stream. “You notice the moment it touches your lips”, promises Udo Kramer; and he is sure: “It makes a difference as well in our products. The sausage has an extra-special bite to it.” This makes every Kramer sausage an original: unique and unmistakeable.

Nevertheless, for the water to unleash its strength in the products, processing must be at a high level. “Everything that has to be mixed is put into my Rühle tumbler, an MKR 220“, says Udo Kramer. Right now, he is making ham, controlling the temperature with a tablet computer. He sends the data to the office computer via his wireless internet connection: “That’s how I know in advance how good it’s going to be.”

Craft is a Kramer tradition. Alfred Kramer founded the company in 1970, and in 1997 he handed it down to his son Udo, who is continuing what his father started. His wife Annette is always by his side: The couple itself has four children and wants to pass onto them the values that have been exemplified in the previous generation. Both believe firmly that it was a coincidence that they found the better water.

The combination of original craft and ultra-modern high tech is what distinguishes the Kramer butcher shop. Udo Kramer has a sensitive taste, and even small nuances are important to him: be that at work or at home. His wife is his soulmate, and it is important to both of them that they can fully rely on something. Udo Kramer points towards his original tumbler by Rühle. The machine purrs quietly, Udo Kramer trusts it: