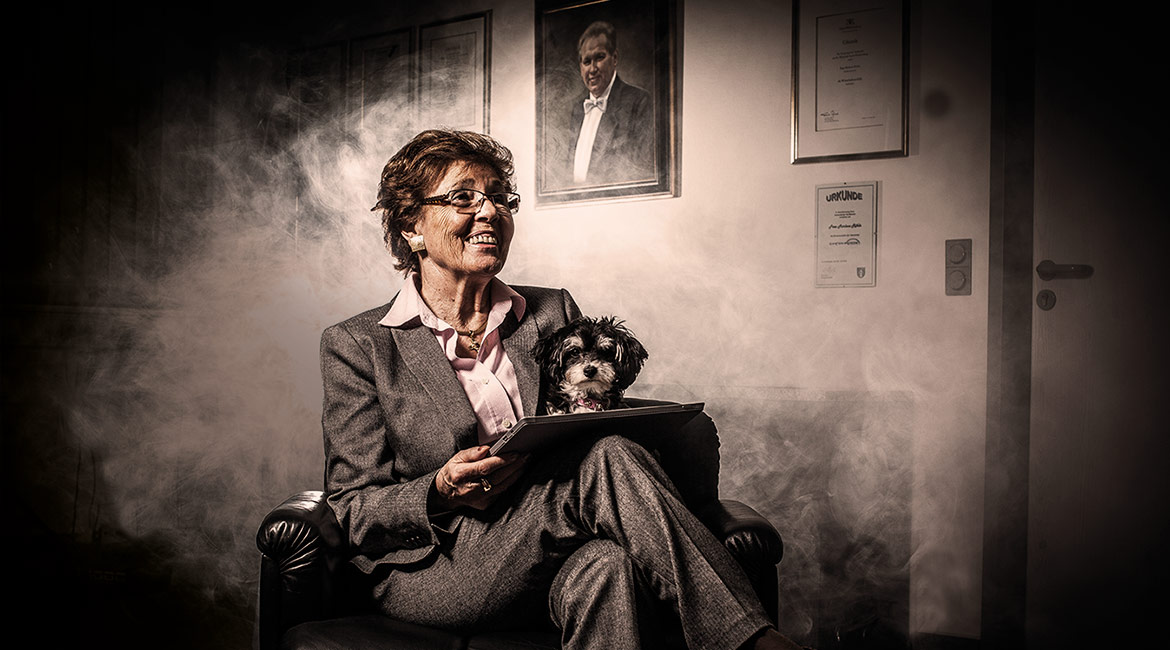 The way to Rühle is no short cut. It leads past several lakes and up a mountain. Once you’ve spotted a nationally known brewery, you’re almost there. Your goal is the small Black Forest town of Grafenhausen. Here is where state - of - the - art HighTech machines are produced. Rühle originals. That the company still calls this place home is due to the efforts of one woman: Marlene Rühle.

Marlene Rühle was born and bred in the Black Forest. She just recently celebrated her 80th birthday in Grafenhausen. Her office contains newly unwrapped presents, but also relics of another time – an old calculator, for example, and a 30 year old fax machine that she still uses. Documents and honours hang on the wall. Among them is a state prize from Bavaria, and awards from Baden - Württemberg, including the Enterprise Medal. Marlene Rühle is proud of it.

Her desk faces the window. When you enter the room while Marlene Rühle is working, you see only the back of her head. There’s a reason for that. “Look,” she says, sweeping her arm across the window. “Why would I turn my back on this view to stare at the door?” The view out the window approaches 180 degrees. A genuine Black Forest panorama. From Marlene Rühle’s office you could shoot photos worth of glossy posters or postcards. “On a clear day you can see all the way to the Alps”, she says.

Marlene and her husband Willy Rühle, founded the company together five decades ago. Willy, who died in 1991, had previously worked for a Swabian machine builder. But at one point Marlene gave him an ultimatum: Black Forest or nothing. Willy made the right decision. The opportunity to trade Grafenhausen for other locations presented itself many times. Once the company was successful, a Bavarian customer tried to lure it to Munich. The offer even included a manufacturing shop.

"Only in the Black Forest do I feel at home." (Marlene Rühle)

Once the pair nearly arranged to join a town in South Baden. And after the fall of the Berlin Wall, they received a lucrative offer from East Germany. The plot in Plauen was already staked out; the Rühles might have been swallowed up by the engines of economic development. But Marlene was having none of it. In moments of doubt, she was the one who tipped the scales. Her words decided their future. “We stay here,” she said. “This is our home.”

Marlene’s parents’ house is a few hundred metres from the current company headquarters. The manor was built in 1665. It was there that, 300 years later – in 1962 – Willy began to invent machines. He built them differently from anything previously available on the market. “Our first machine was a cutting machine, mostly for ham and bacon,” recalls Marlene.

Existing models from other manufacturers still placed the rind vertically upright. “It didn’t look nice,” says Marlene. The cut slices were routinely squashed under the weight of the meat. Willy Rühle was the first to lay the meat horizontally, which allowed him to build an automated machine that cut more cleanly than a butcher’s newly sharpened knife.

Willy Rühle was the first to lay the meat horizontally, which allowed him to build an automated machine that cut more cleanly than a butcher’s freshly sharpened knife.

In the years that followed, Rühle originals continued to set standards. The curing machine, the trade tumbler, a novel batch tumbler and a frozen - meat cutter – in the first 15 years, the little company managed to make more inventions than many others in 100 years. All the while, both the company and the family were growing.

The Rühles’ three children, Sabine, Claus and Jörg, were born at two - year intervals beginning in 1964. Long before the government made an issue of day care, flexible work time and work/life balance, Marlene showed how to reconcile career and family. At Rühle, everybody rolled up their sleeves. And still managed to have a good time. Marlene provides an example: “Our first apprentice, who began in 1966, is still with the company,” she says. He, too, is a genuine Black Forest original. A Rühle.

Willy Rühle recognised early on that it’s not enough to build machines like everybody else and just offer them in a different colour. He developed ideas, introduced new techniques and eventually must have wondered how to protect himself against copying by others. The solution, now as then, is top performance. The Rühles always strive to stay one step ahead of the competition.

After Willy’s death, one of the couple’s long - standing dreams was realised: Marlene Rühle built a new factory in the Black Forest, in a green meadow in Grafenhausen. Sorrow faded. Plans were made. Construction took only nine months. Then production started at the new location.

Today everything is in one place – development, production, assembly and administration. Roughly 160 workers under one roof. At the start of the 2000s, the site was expanded by an additional 1.300 square metres. Rühle, the little company that once had to constantly fight for survival, has long served as the economic backbone of the Upper Black Forest region. Medium - sized companies like Rühle – led by insiders, family-oriented, innovative – are disappearing from the towns around the Feldberg mountain.

Rühle also has the advantage of seamless succession. Claus Rühle joined the management team in 1999. He took over his father’s role, providing meticulous, visionary input to ensure that Rühle’s technology remains first - rate. Claus is a genuine product of the Black Forest – just like his mother. Just like the company whose name they both bear. Just like the machines that are built here in Grafenhausen. All genuine originals. It’s the only way.

In 1966 Marlene and Willy Rühle founded the machine company Rühle, which immediately made a name for itself in butchery by virtue of its novel and ingeniously simple technology. The first original Rühle produced in 1966 revolutionised the way of cutting ham and bacon. The following year, Willy invented additional machines for curing, tumbling and blending. After his death in 1991, Marlene took over the management. The next year, the company moved from its previous location in Marlene’s parents' house to its current location in Grafenhausen.

Claus Rühle, one of the couple’s three children, earned his stripes in the company during the early 1990s. In 1999 he became CEO. The following year, Marlene Rühle officially transferred ownership of the company to him. However, she remained active in Rühle management until 2013. Today, from its headquarters in Grafenhausen, in the district of Waldshut, the company oversees some 160 workers.