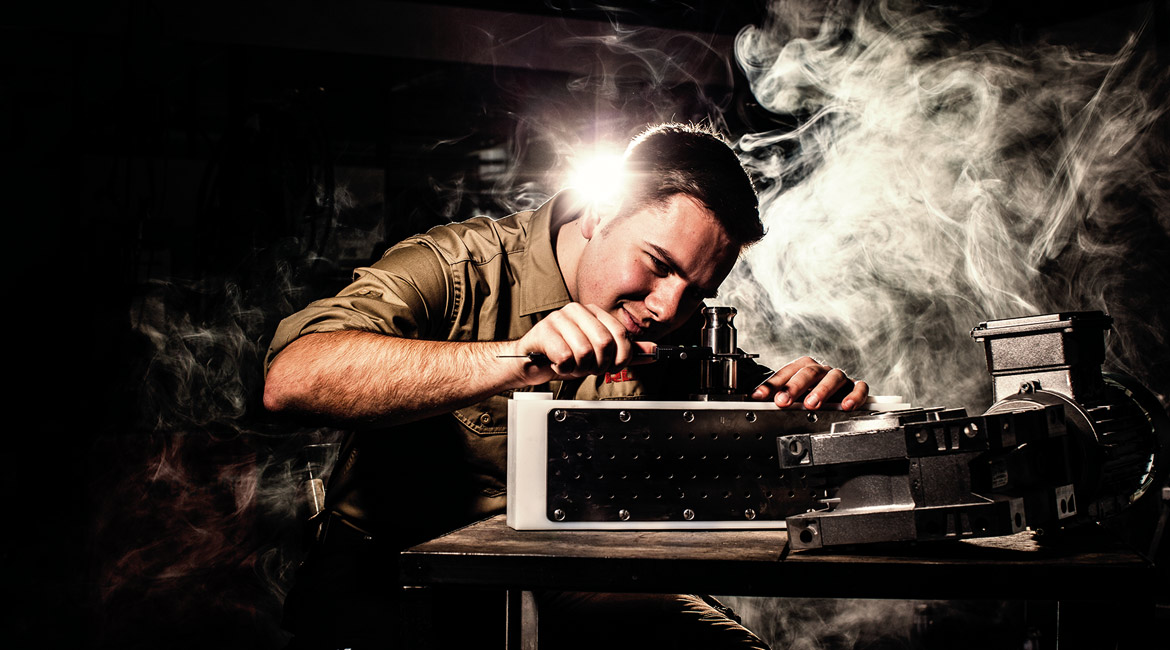 “I would do it all again!” (Martin Baschnagel)

Martin Baschnagel is 23 and has been with Rühle since 2011. Today he works as a project leader in the development department.

Many companies like to say that they are one big family. “With us, it’s real,” says Martin Baschnagel. Since 2011 the 23 year old mechanical engineer has been with Rühle in the beautiful Black Forest town of Grafenhausen. Today, he is the project leader in the development department. He’s working on the next version of the Rühle AR 10 cutting machine. Baschnagel is young, yet he’s come a long way. “Here you enjoy a lot of freedom, but you also have a sense of responsibility,” he says. He likes that.

The close cooperation that is characteristic of the development department extends elsewhere. New production innovations are decided within a small team. The boss himself always sets the agenda. “I speak regularly with Claus Rühle,” says Baschnagel. “When I recently had an idea for improving one of our machines, he heard it first - hand from me.” Shortly after came the decision: let’s do it.

In development work, too, the emphasis is on details. Baschnagel isn’t the only one who strives with meticulousness, care and precision to make every new version of Rühle’s genuine originals a little better. Faster, more powerful, more reliable. “We understand what customers want,” says the young engineer. Sometimes even a technical quantum leap is possible. He laughs. Then he goes quiet. He doesn’t like to reveal too much. Only this: the new Rühle will be good. Even very good.

Then he recalls how he came to Rühle. “After technical college, I actually wanted to go into the automotive construction. Then, one of my friends recommended Rühle.” Baschnagel is from Schluchsee, just about ten minutes by car from the Black Forest town of Grafenhausen. Both the young engineer and the mechanical engineering company are genuine products of the Black Forest. The open and respectful personal interactions are appealing. Baschnagel had noticed that during an internship at the company before his job - related studies at DHBW Lörrach. Today, Baschnagel knows he made the right decision. “I would do it all again”, he says.

He describes the work atmosphere as very friendly, informal and with lots of freedom. In the teams, workers are encouraged to freely voice their opinions. Projects are assigned milestones that include meeting certain deadlines. How to get there is decided by the team. “It works very well”, says Baschnagel.

He looks forward to going to work in the morning. “My co-workers also look like they’re having fun here,” he says. “Many of them run around the building with grins on their faces. The mood is good; people greet each other; and they do things together.” They are genuine Black Forest folk, working in the most beautiful part of the Black Forest. “It’s a dream.”

But for Baschnagel it’s important to be challenged and encouraged. “I want to achieve something,” he says. “And I have the strong impression that this will be supported here at Rühle.”

There is a real sense of cohesiveness at Rühle. The boss himself takes the time to listen to each worker. And they in turn identify strongly with the products and with their employer. “No question: I’m a Rühle,” says Baschnagel.