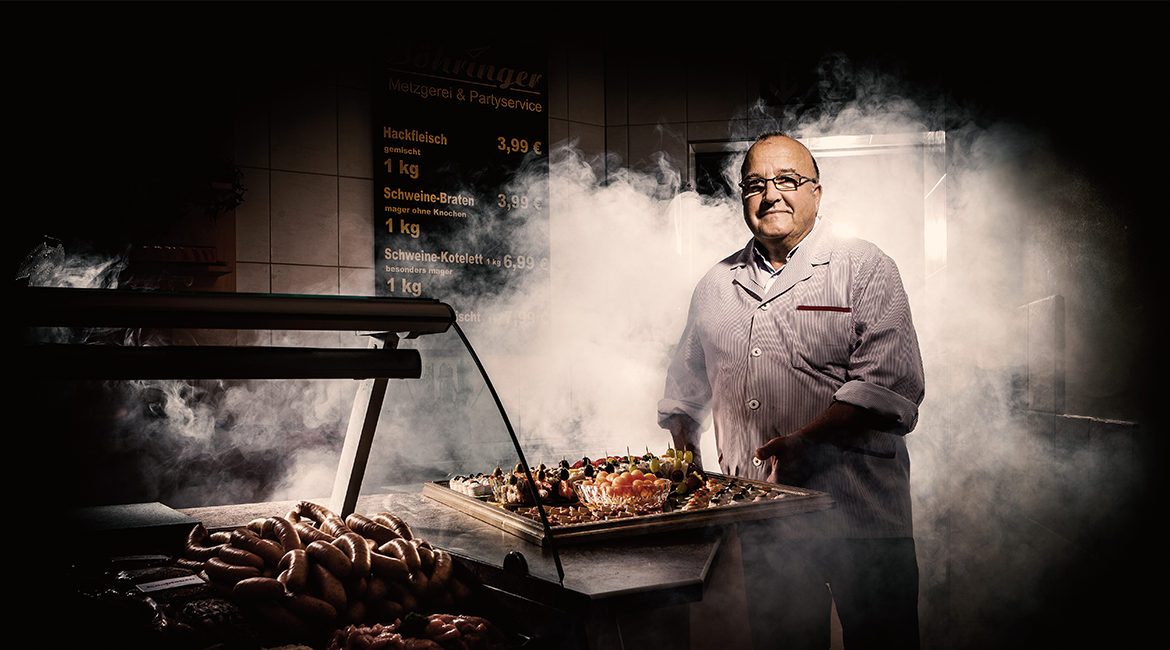 I wouldn’t be able to live without my Rühle anymore! (Wolfgang Böhringer)

A little better every year – Offenburg-based butcher Wolfgang Böhringer has made it thanks to his party service as well.

From the front, Wolfgang Böhringer’s butcher shop looks completely inconspicuous. A sober, functional building on an industrial estate in the district of Elgersweier, in Offenburg – not a place you would find chance customers. Those who want to shop here have to sit in the car and drive at least three kilometres. Could this actually go well?

Böhringer laughs happily. As a person, he is a phenomenon, unique. “See for yourself”, he says. It has now been 30 years since he started from scratch in the industrial estate. Back then, he had a special idea: As well as his shop in the city centre, he also set up a party service. The best bit is that Wolfgang Böhringer even had his own party bus, fully equipped with large fridges, beer tap system and dishwasher: a mobile bistro.

Since then, sales have increased strongly each year. The company is stronger today than ever before. Wolfgang Böhringer may have given up on the bus since then, but that was because his primary business was becoming more and more successful. The party service is booming, and he converted the bus garage into a large, modern kitchen long ago.

The company now has 20 employees, preparing dishes for 1,000 people on average every week. They provide catering for parties, do barbecues, and serve cold platters and warm buffets. They set up tables and chairs, carry plates and cutlery, and look after guests. “If you’re doing something, you have to do it properly”, says Wolfgang Böhringer. He doesn’t do half measures. All or nothing is the tradition as far as he is concerned.

He has one main requirement for his suppliers: They must deliver each day. “Freshness is everything”, says Wolfgang Böhringer. And nowhere is this more important than in the external catering business, where the telephone rings first thing in the morning because somebody has forgotten to order lunch for 50 guests. “It’s routine for us”, says Böhringer: And it only works if everything runs smoothly behind the scenes. The butcher must be able to rely on his employees and suppliers, but also on his real originals by Rühle.

He then begins to wax lyrical: “Our products have never been as good as they are today”, says Wolfgang Böhringer. He has recently invested again in a Rühle tumbler with contra-rotating arms. Its performance convinced him, he assures us. And Wolfgang Böhringer, who looks at the current business figures every two days, is also convinced by the facts: “Look at gyros meat. Previously, we were selling on average 60kg per week. Now we can manage that in two days.” In all that time, he has done nothing to his ingredients. In this case, it is high-tech equipment from the Black Forest that really makes the difference. “I wouldn’t be able to live without my Rühle anymore”, he says.

Böhringer had the party service idea a good 40 years ago, when he met the former German president, Walter Scheel, at a function in the Black Forest. He spoke for a long time with the politician, who was so amazed by Böhringer’s business idea that he supported his cause. He even helped Wolfgang Böhringer in talks with the bank. “At first, everyone thought I was mad when I said that the German president was going to vouch for me”, Böhringer remembers with a grin. And from then on, things have only gone one way: up.

Business has developed immensely. Wolfgang Böhringer’s ability to supply top quality all the time, even under time pressure, has earned him a reputation in the city. He once catered for 67 communions on a single Sunday. At Christmas, orders are distributed to customers from the car park, because the stampede would otherwise put the shop out of action. Therefore, two members of staff wearing winter coats have to stand in the yard and pass orders directly from the delivery lorry to the customers. One time, the police even came to direct the traffic on the industrial estate. “They turned it into a one-way street”, remembers Wolfgang Böhringer: drive in at the front, collect in the middle, and exit on the other side. Böhringer enjoyed it: he appreciates it when something works perfectly.