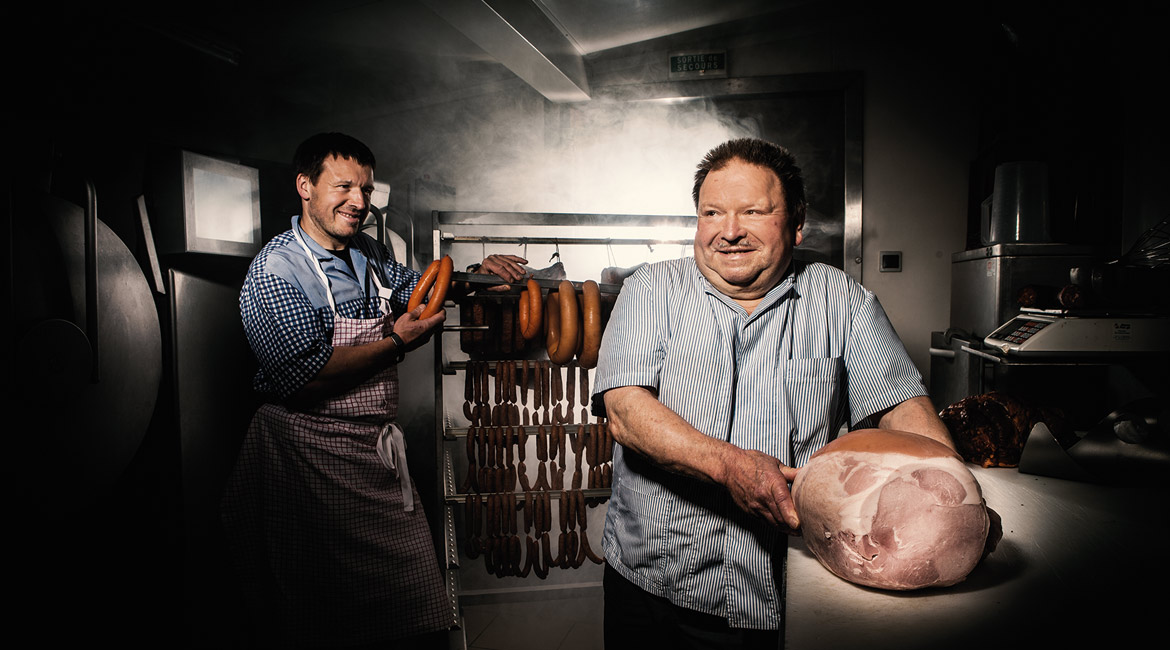 I’ve relied on my Rühle for 20 years! I can’t manage without it! (Mathieu Edel)

You can taste genuine quality

André Edel and his son Mathieu run Boucherie Edel, a small butcher’s in Cernay, France. Their appreciation for the natural quality of their products is obvious.

“Here, smell this!” says André. Born and bred in the town of Cernay, the 72-year-old master butcher grabs a fresh cooked ham and hands it over. The meat smells hearty and natural. Just the way André likes it. “Good meat doesn’t need much seasoning,” he says. “It tastes fantastic too.” André has a passion for butchery. He is a real character, a genuine original.

When he was learning his trade, butchery was still all done by hand. It used to take a good eight weeks for a carefully dissected pig to become ready-to-sell ham, Black Forest style. These days André benefits from Rühle’s HighTech to produce his traditional recipes.

One of his genuine specialities is baked ham. A savoury ham cooked in bread dough, which lends it a special flavour. The meat is kneaded under vacuum in a Rühle tumbler to keep it hearty and tender. André’s 47-year-old son Mathieu is examining a whole row of hams that remained in the tumbler overnight. The gentle rotation near the freezing point frees protein that joins the various cuts of meat together. The ham develops its own sort of organic glue. A genuinely natural product.

Mathieu gazes with satisfaction at his MKR 220. “We’ve had it for 20 years,” he says. “It just goes a lot faster and our Rühle makes the work very pleasant.” You’d never know how old the machine is. Mathieu cleans the Rühle tumbler spick and span. “It’s a breeze,” he says. It takes him all of five minutes. The butcher’s has something akin to affection for his Rühle. Could he imagine working without it? Mathieu doesn’t hesitate: “No. It’s such a joy to work with!”

Located in the heart of Cernay, the small Boucherie Edel is a genuine family business. André’s wife Blanche handles the counter along with André’s son Mathieu, 47, and daughter-in-law Sabine. The establishment had previously been a branch of a chain-store butcher, and Andre had once trained there. But in 1978, with no successor for the business in sight, André took it over. Cernay, André’s hometown, has 11,000 residents. People know each other there. The Edels greet each customer personally.

André is convinced that so long as his name remains over the door, he must prepare the products himself. “What I sell, I also want to produce myself.” André’s attitude is shared by his son.

André is responsible for introducing several innovations to Alsace. He was one of the first to offer bread-encrusted ham. Today the product is considered a regional speciality. A typical holiday dish. “At Christmas we sell 120 of them,” says André. He does not tolerate inconsistencies in production. Each ham must be perfect. That’s another reason why his Rühle is so important to him.

At the kitchen table, André takes a slice of baked ham from the platter. The fresh bread is on the table. But the butcher takes only the ham, rolls it up and bites into it. He closes his eyes for an instant. André is a savourer. As such, he firmly believes that the quality of his products makes the difference.